a) Sawed Off is a democratic guild of brothers and sisters in arms (and our cousins over four feet in height) gathered together to have fun and achieve our common goals, founded in Ironforge, as witnessed by King Magni Bronzebeard, may his beard be as great as his kingdom.

a) Motto: "Honor above glory"

b) Coat of arms: A pair of beer mugs, brown on white with a brown fur border

d) Founding Day, November 23, the date Sawed Off was formed, is celebrated each year. 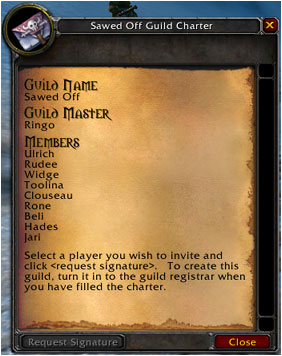 Upon greeting or departing from a guild member, it is proper to recite the motto, "Honor above glory," adding their guild title ("Honor above glory, brother," "Honor above glory, councilor," etc.) and salute them. Members of allied guilds should also be saluted, as should the kings of Ironforge and Gnomeregan. Otherwise, a bow or curtsey, as appropriate, is what is performed for all others.

a) Honor above glory: Sawed Off prizes the quality of a person more than their prowess on the battlefield. Members of Sawed Off are honest, fair and considerate, both in their dealings with each other and with outsiders. Being a member of Sawed Off means you have inherited a good reputation, one that will open doors for you throughout Azeroth and beyond. Keep the guild's name at least as good as it was when you received it.

b) Fun comes first: Drama is strictly forbidden, and insistence on drama can lead to the thane choosing to suspend or expel a repeat offender from the guild. You are all adults, and can solve your problems without drama. If you are not an adult, fake it.

c) Active members are defined as having played within the past six weeks. Sawed Off recognizes real life and other considerations sometimes prevent more active play, but voting decisions ultimately must be decided upon by those playing on a semi-regular basis.

d) All active members are equal, and have an equal vote in decisions, with a simple majority (one half of all active members plus one) deciding all issues, unless stated otherwise. (Any policy or election vote that takes longer than a week will be decided by half of all those voting, plus one instead.)

e) You are your own person. You are never required to attend a guild raid, meeting or election. You are never required to offer another member assistance, in whatever form it might take. However, you will normally find these freely offered to you and your willingness to do the same is appreciated. Sawed Off is strongest when we stand together; attendance at events is greatly appreciated. Members have an absolute right to personal privacy – if you know something personal about another member, keep it to yourself.

a) New members must be sponsored by an active member who vouches for the character of the nominee, and is responsible for guiding them through the membership process. The sponsor either has played with the nominee extensively or knows them in real life. It is acceptable for an applicant to begin this process by seeking out a sponsor, but sponsors are ultimately responsible for those they nominate. Prospective members of Sawed Off must be members of no other Alliance guilds on the Silver Hand server.

b) Ten more active members must then approve the choice. Both sponsors and voters must either know the nominee in real life or have grouped with them in-game before casting a vote.

c) Nominations that fail to garner 10 votes within three months expire, and the process must start anew, without a waiting period or prejudice.

d) After obtaining a sponsorship and 10 votes, there is a one-week call for objections among active members. Note that nominees are not told they have entered this period and violating this rule may be subject to sanctions from the guild.

e) At any time before the end of this one week period, an active member may drop a blackball against the applicant, which ends the process and prevents it from beginning again for the nominee for six weeks, at which time they may reapply without prejudice.

g) The nominee is informed of the guild's decision by a councilor or the thane.

a) The thane of Sawed Off is elected by a simple majority of the active members once every six months, on the Sunday after the vernal and autumnal equinoxes (March 21 and September 22).

b) The thane can also be voted out at any time if 50 percent of the active membership votes to do so.

c) Although Sawed Off is a democratic guild, the thane has a tie-breaking vote when required. In addition, the thane can and will make policy decisions on an interim basis as required, subject to debate by the membership at a later time (i.e. not during the middle of a raid).

d) The thane also has the discretion to suspend or expel a member, but must state their reasons for doing so in writing after the event.

a) The thane may nominate any active member who has been a part of the guild for at least 30 days to be a councilor.

c) Councilors act in the leadership role when the thane is not available, and additionally serve to handle problems, both within the guild and from outside it. They may create interim policies as a unit, when required (a majority of the available councilors must agree on said policies) or suspend or expel members. These decisions may be overruled by the thane, and are subject to all restrictions faced by the thane.

a) The loot master, who may be the thane, a councilor, the raid leader or any active member designated by one of the proceeding, adjudicates loot decisions on raids.

b) The loot policy only applies to items of uncommon or better quality obtained on raids. Items not of interest to raid attendees will be handled as "junk" loot. (See below.)

c) Bind on Acquire loots are distributed when they are found. Bind on Equip and other loots will be saved to the end of the raid, or the end of the evening, whichever comes first.

d) Items may be distributed early if everyone who would use the item agrees to it. If there is any disagreement, loot is held to the end, as normal.

e) If someone has to leave the raid prior to loot distribution, they may tell the loot master what items they are interested in rolling on (although they are only eligible for loot acquired when they were present) and send a letter from the nearest mailbox in confirmation. The loot master will regard all such letters as in-person requests for the loot and treat them normally.

f) Priority will be given based on who actually needs an item rather than on who can simply use an item. (A nice one-handed sword, for instance, should be offered to melee classes prior to allowing casters capable of using a sword an equal shot at it. A one-handed sword that improved a certain type of spell casting, on the other hand, would be offered to casters who could both use the weapon and cast those sorts of spells first.) The policy applies to recipes of uncommon or better quality as well.

g) Intentional misrepresentation of one's need for an item will be subject to sanctions at the discretion of the councilors and thane, including being removed from loot rolls entirely for a week or more, suspension from the guild, or expulsion. A player discovering after one has acquired the loot that one cannot actually use it on the raiding character, or that their need for it isn't as great as was thought (the item is a marginal upgrade, for instance) should return the item to the loot master for redistribution without prejudice.

h) Priority will be given to members over nominees and members of allied guilds (allies and nominees to be considered equally), who in turn will be given priority over guests.

i) Everyone gets one before anyone gets two: Winning or being awarded uncommon loot or better during the course of a raid disqualifies the winner from winning any more such loot for eight hours or until the next raid, whichever comes first.

j) Loot will be randomly distributed amongst the categories decided upon by the loot master, as described above, with the best items distributed first.

k) Individuals designated by the loot master will collect quest drops and "junk" loot. Any interesting bits of loot are offered to the raid attendees and active members prior to it being sold. If no one, including guests, wants the loot, attendees may ask for the loot for alternate characters. Proceeds from sold loot goes to a guild fund used to pay for raid and other guild expenses, as designated by the thane and councilors. At the discretion of the loot master officers or thane, certain items of loot will be held back and not sold, but saved instead. All such loot and proceeds will be stored by a guild mule until such time as a guildhouse is obtained. Loot may also be offered to our allied guilds as appropriate, subject to written notification to the guild.

l) The above rules apply to Sawed Off raids only. Joint raids with our Brothers in Arms (see below) are treated as though all members of allied guilds are Sawed Off guild members. Single group activities, including instances, are not governed by this loot policy and are to be handled by the group, in accordance with the quality of behavior expected of all members.

7 - Brothers in arms: We are allied with Razor's Edge and Resurgence, who are old friends whom we have fought alongside and drank with for years.